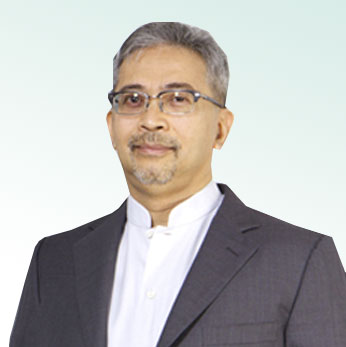 Mirzan Mahathir is 54 years old and has extensive business interests in Malaysian companies (both public and private) as well as companies domiciled outside the country.

He graduated with a Bachelor of Science (Honours) in Computer Science from Brighton Polytechnic, UK and obtained his Masters in Business Administration from the Wharton Business School, University of Pennsylvania, USA. He started working with IBM World Trade Corporation for 3 years, and subsequently had 4 years of investment banking experience with the Salomon Brothers Group.

In 1990, he ventured into business and was appointed to the Board of Konsortium Logistik Bhd in Sep 1992. In Jan 1996, Konsortium was listed on the Main Board of the Stock Exchange of Malaysia. Mirzan was the major shareholder of Konsortium and held the position as the Executive Chairman & President; a post he held up till 12 Jun 2007 when he resigned to concentrate on his private businesses.

Mirzan is now the Chairman & CEO of Crescent Capital, a Malaysian investment holding and independent strategic and financial advisory firm founded by him. He currently manages his investments in Malaysia and overseas while facilitating business collaboration in the region.