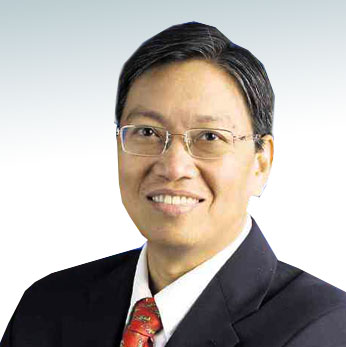 Edgar O. Chua currently served as chairman of the Makati Business Club (MBC). Mr. Chua has had many years of experience in the business fields of chemicals, auditing, supply planning and trading, marketing and sales, lubricants, corporate affairs and general management.

He held senior positions outside the Philippines as Transport Analyst in Group Planning in the UK and as General Manager of Shell Company of Cambodia. He also held various positions in Shell Oil Products East including General Manager for Consumer Lubricants covering all countries East of the Suez Canal, including Saudi Arabia, China, India, Korea, ASEAN, Australia, New Zealand and the Pacific Islands. Mr. Chua serves as the Country Chairman of Shell Companies in the Philippines, Guam, Palau and Saipan. Mr. Chua serves as Chairman of the Philippine Business for the Environment and Chairman of the Philippine Institute of Petroleum, Inc. Mr. Chua served as Chairman of Pilipinas Shell Petroleum Corporation since November 1, 2016 until May 25, 2017 and since 1998 until May 25, 2017 respectively. He serves as Director at Metropolitan Bank & Trust Company. He has been an Independent Director of Integrated Micro-Electronics, Inc. since April 2014 and has been its Lead Independent Director since August 16, 2017. He has been an Independent Director of Energy Development Corporation since July 2010. He serves as a Director of Kamayan Realty Corporation. He serves as a Director of various RDS entities in the Philippines. He serves as a Director of joint venture companies. Mr. Chua serves on the Advisory Board of Coca-Cola FEMSA Philippines, Globe Telecom, Inc., and Mitsubishi Motors Philippines, Inc.
Mr. Chua earned his Bachelor of Science degree in Chemical Engineering from De La Salle University and attended various international seminars and courses including the senior management course in INSEAD in Fountainbleau, France.