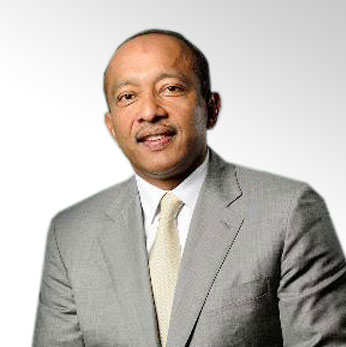 Tan Sri Dato’ Seri Shahril Shamsuddin, aged 55, is currently the President and Group Chief Executive Officer and Non-Independent Executive Director of Sapura Energy Berhad (formerly known as SapuraKencana Petroleum Berhad) since 9 December 2011.
Tan Sri Shahril is also the President and Group Chief Executive Officer of Sapura Group, a long-established business in Malaysia since 1975 with a diversified portfolio ranging from education, aviation services, property development and management, industrial and automotive component manufacturing as well as secured communications technologies. He is also serving as the Deputy Chairman of Sapura Industrial Berhad and is a Non-Executive Director of Sapura Resources Berhad.
Tan Sri Shahril is a member of the Massachusetts Institute of Technology Sloan Asian Executive Board, a member of Universiti Teknologi Malaysia’s International Advisory Panel as well as an active participant of the World Economic Forum. He is also a member of the Board of Trustees, Treasurer and Executive Committee of the Perdana Leadership Foundation.
In recognition of his achievements and contributions to society, he has been awarded several major honours and titles. In November 2007, he was awarded the Legion d’ Honneur by the Republic of France. In 2009, he won the Malaysia Ernst & Young Entrepreneur of the Year Award and in 2013 he was conferred an honorary doctorate in Technology Management by Universiti Teknologi Malaysia. Tan Sri Shahril was presented the Man of the Year Award 2014 by The Oil and Gas Year.
Tan Sri Shahril holds a Master of Science in Management of Technology from MIT Sloan School of Management and a Bachelor of Science in Industrial Technology from California Polytechnic State University