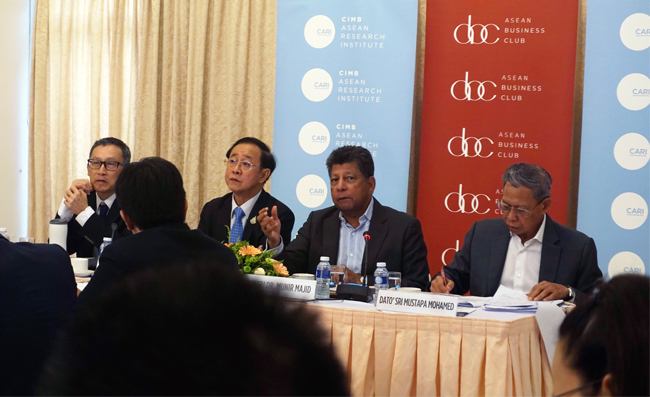 Kuala Lumpur, 18 February 2020 – Former ministers from Malaysia and Thailand believe that ASEAN’s third- and second-largest economies in ASEAN respectively, can lead the way in pushing for an integrated region encompassing infrastructure, trade and investments, and people. This can be facilitated through better connectivity between both economies, catalysing greater regionalism within the bloc itself.

This was the call made during the ASEAN Roundtable Series organised by the CIMB ASEAN Research Institute (CARI) in collaboration with the Royal Thai Embassy in Malaysia. The theme of the roundtable discussion concerned the future of Thai-Malaysia connectivity and its implications for ASEAN regionalism.

Tan Sri Dr Munir Majid, Chairman of CARI and President of the ASEAN Business Club, observed in his opening remarks that in the face of an unstable international security and trade environment, it is imperative for ASEAN to push for greater seamless trade connectivity.

Noting that the intra-ASEAN shares of trade and investment have remained stagnant over the years, he argues that the political impetus for greater integration has been absent among ASEAN leadership, hindering the bloc from reaching its full potential. He believes that Malaysia and Thailand can serve as a vanguard to help expedite the Master Plan on ASEAN Connectivity (MPAC) 2025 which encompasses the physical, institutional, and people-to-people linkages, providing the foundational means to achieving the ASEAN Community 2025.

“The current COVID-19 crisis points to the need for greater integration in ASEAN and between Malaysia and Thailand. Setting standards and confidence in common adherence to them will increase connectivity at all levels, and in their quality. In the present situation what is required is the need for common standards in health and hygiene. Not to be forgotten are high common standards of transparency and disclosure,” said Tan Sri Dr. Munir Majid.

H.E. Narong Sasitorn, Ambassador of Thailand to Malaysia, pointed out that connectivity is the top agenda for both countries but there has not been much progress as the works are compartmentalised, no one has the big picture. He noted, “Connectivity is a key growth engine in ASEAN where Malaysia and Thailand have a strategic role to play. We are the second and third-largest economies. Our countries are located right in the middle where mainland and maritime ASEAN meet. Our bilateral trade makes up almost 40% of the total intra-ASEAN trade. What our countries need is a ‘shared vision’ to achieve this common goal of shared prosperity.”

Given the ongoing uncertainties from US-China trade war to the recent outbreak of COVID-19 which has threatened the global supply chains, H.E. Narong emphasised that ASEAN must act fast on connectivity as investors do not invest in countries but locations, and the regions that guarantee smooth logistics for their supply chains.

During the subsequent panel discussion, panelist H.E. Arkhom Termpittayapaisith, Thailand’s former Minister of Transport, discussed what the implications from improved Malaysia-Thailand connectivity would have for regional trade, logistics, and investment. He pointed out that Thailand has been making its biggest investment yet to upgrade its transport infrastructure including a double-track railway down through the south of Thailand to Malaysia. Through its well-connected highway and railway networks, Thailand can provide access to the growing markets in Cambodia, Laos, Myanmar, Vietnam and inland China for Malaysian businesses. He asked for continued and even closer cooperation between government officials of the two countries. The building of two bridges over Golok river which has been long overdue and the early conclusion of the Cross Border Transport Agreement are among the connectivity projects that should be given priority.

“Improved physical and institutional connectivity between Malaysia and Thailand does not only improve the efficiency of logistics and trade flows between the two countries,” H.E. Arkhom pointed out. “Internationally, it would also stimulate even more investment and economic dynamism along the integrated belt of regional supply chain.”

The other panellist, YB Dato’ Sri Mustapa bin Mohamed, illuminated his own experiences in helping execute Malaysia-Thailand bilateral cooperation initiatives while he was the former Minister of International Trade and Industry. He pointed out that there needs to be more follow-through of projects and existing mechanisms for bilateral talks need further enhancement.

“While there are several bilateral mechanisms already in place, such as the Joint Commission or the Joint Development Strategy for Border Areas, these have often been more ceremonial in character where both sides exchange scripted statements rather than engage in meaningful discussions,” said the former minister.

“I would like to propose a number of ways forward for the bilateral relationship. One would be to make more frequent high-level visits and to focus more on socio-economic issues, including enhancing connectivity and increasing bilateral trade and investment. Secondly, instead of ambitiously trying to cover all bases, it would be better to identify a few clear key priorities. To ensure effective follow-up, Joint steering committees, preferably at the ministerial level, could be set up to champion each of those identified priorities.”

Dato’ Sri Mustapa also stated that ‘demand-driven business areas’ should be identified and so that targeted trade facilitation can be provided while emphasising the importance of public-private-partnership investment in infrastructure projects.