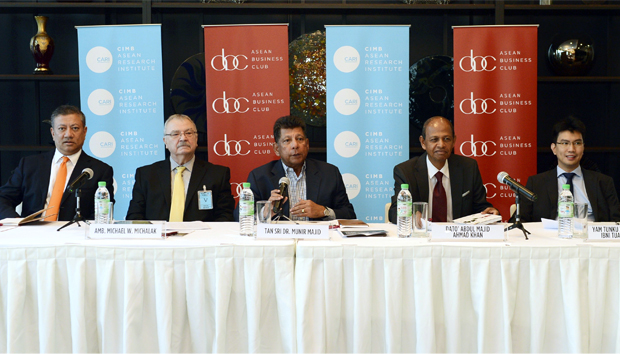 ASEAN Roundtable Series on “Dealing with a changing world order: What will Trump’s economic and foreign policies mean for ASEAN?” Kuala Lumpur, 14 March 2017 – ASEAN businesses have urged President Trump’s administration to provide more clarity and certainty in U.S. trade policies for the benefit of mutual growth in the U.S. and ASEAN. A roundtable discussion, with the theme “Dealing with a changing world order: What will Trump’s economic and foreign policies mean for ASEAN?” was organised by CIMB ASEAN Research Institute (CARI) today, in collaboration with the ASEAN Business Club. Tan Sri Dr. Munir Majid, Chairman of CARI, and President of the ASEAN Business Club chaired the roundtable. Speakers were Dr. Arup Raha, chief economist at CARI; Ambassador Michael W. Michalak, senior vice president and regional managing director at the U.S.-ASEAN Business Council; Dato’ Abdul Majid Ahmad Khan, former ambassador of Malaysia to China; and Tunku Zain Al ’Abidin who is a senior fellow at CARI. Over 70 senior corporate executives, government officials, and diplomats from seven countries namely Indonesia, Malaysia, Singapore, Vietnam, U.S., Denmark, and Russia attended the roundtable. In 2015, the U.S. was ASEAN’s fourth largest trading partner, with trade between the two recorded at US$212 billion. Nearly a third of all U.S. investment in Asia went to ASEAN, more than U.S. investment in China, India, and Japan combined. The participants of the roundtable highlighted their concerns about President Trump’s possible protectionist policies. Speakers also discussed how the new administration’s policies could negatively impact business and investment in ASEAN and the region’s economic integration. “The U.S. had already withdrawn from the Trans-Pacific Partnership (TPP), leaving the remaining eleven members in the pact, of which four are ASEAN member states, to reevaluate the trade deal which they began negotiating in 2008. U.S. trade relations with China and other partners are still largely undefined. Business requires certainty to operate and thrive, especially when the ASEAN Economic Community is at a nascent state with teething issues. We urge President Trump to continue engaging with ASEAN in order to forge mutually beneficial trade ties,” said Tan Sri Dr. Munir Majid. Ambassador Michalak believes that the U.S. companies will continue to invest in ASEAN due to the region’s favourable demographics and market potential. “ASEAN, with its ongoing commitment to build an integrated community, remains a very attractive investment destination for American companies. Although the U.S. has a trade deficit with ASEAN, it is an important export market for American products, supporting about half a million jobs in the U.S.,” said Ambassador Michalak. U.S. businesses have been the largest cumulative source of foreign direct investment in ASEAN, and ASEAN countries are increasing their investment in the United States. U.S. goods and services exports to ASEAN supported over 500,000 American jobs. Major goods exports are machineries, aircraft, mineral fuel and oil, optic and medical Instruments and agricultural products. Dr. Arup Raha commented that if President Trump follows through with his campaign rhetoric and imposes tariffs of between 25% to 45% on Chinese exports, it would be a game changer for the global economy. Such tariffs would disrupt supply chains that have been functioning for many years and the effects will be felt all over ASEAN. “Tariffs would also lead to a further rise in the US dollar and weaken the RMB, both of which would have a negative impact on Asian currencies. Over the medium term, potential growth will suffer as efficiency gains from trade are lost. The countries that will feel the most pain are the ones that rely on open international markets to sell their products, and that includes almost all of ASEAN,” said Dr. Raha. Former Ambassador of Malaysia to China and current President of the Malaysia-China Friendship Association, Dato’ Abdul Majid Khan warns that a trade war between the U.S. and China would not only hurt the two countries, but also global economies. China’s National People’s Congress, which met just last week in Beijing, had also weighed in on the implications and possible impact of President Trump’s policies. “China may have taken away global manufacturing jobs in the past thirty years, but it has also moved up the global value chains. President Trump has yet to meet with President Xi Jinping, but such a dialogue is crucial to provide better clarity to the world of what to expect from the two superpowers. The sooner the better,” said Dato’ Majid Khan. Senior Fellow of CARI, Tunku Zain Al ’Abidin thinks that President Trump’s protectionist positions and Brexit referendum results are both a reflection point for ASEAN. “As evident in the U.S. presidential election results and Brexit vote, there is a growing distrust in public institutions, national or regional. If ASEAN truly wishes to deliver the most optimistic objectives of its proponents, then it needs to build trustworthy yet flexible institutions at an uncertain time such as this,” said Tunku Zain Al-’Abidin. The panel concluded that ASEAN’s development had benefited tremendously from international trade and foreign investment, and non-ASEAN countries have also gained from ASEAN as an export market, as well as the key role ASEAN has played in global value chains. Similarly, the U.S. is a major market for ASEAN exporters, while ASEAN is a crucial production base for many U.S. companies. Therefore, open trade policies are in the mutual interest of both ASEAN and the U.S.