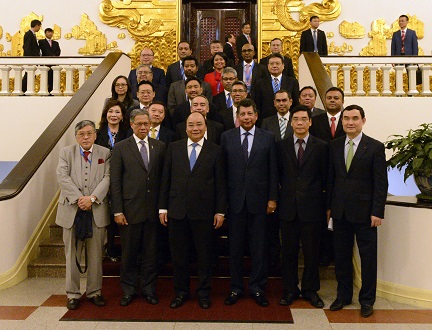 Hanoi, 9 December – The ASEAN Business Club (ABC) and Kuala Lumpur Business Club (KLBC) led a high level delegation for a joint business mission to Hanoi to explore trade and investment opportunities in Vietnam. The business mission was headed by Minister of International Trade and Industry of Malaysia, Dato’ Sri Mustapa Mohd and was received by the President of Vietnam, H.E. Tran Dai Quang, and the Prime Minister, H.E. Nguyen Xuan Phuc and other cabinet ministers.

GDP of Vietnam has been growing at an average of 6.6% between 2000 and September 2016 and its inflation rate has been stable at about 3%. Some economists believe Vietnam may become “the next ASEAN tiger”.

“Vietnam has a market with over 91 million people, and it sits in the Mekong region linking neighboring provinces of China (Guangxi, Guangdong and Yunnan) with a combined population of 390 million. With a young and IT-savvy demographics and low wages, Vietnam is not only an attractive trading post but also a highly competitive gateway to the Mekong markets,” said Tan Sri Dr. Munir Majid, President of ASEAN Business Club.

“Vietnam is brimming with potential and is poised to be a great growth story over the next decade. “With entities like KLBC, ABC and now CIMB Vietnam as business facilitators in this country, we are confident that trade between Vietnam and other ASEAN countries will increase, strengthening ASEAN’s profile as an attractive trading partner for the rest of the world,” remarked Tengku Dato’ Sri Zafrul Aziz, President of KLBC and Group Chief Executive, CIMB Group.

During the two-day visit, the delegation also called on HE Tran Tuan Anh, Minister of Industry and Trade; as well as H.E. Nguyen Van Trung, Deputy Minister of Planning and Investment of Vietnam.

The business mission also provided business-to-business dialogues. In partnership with ABC and KLBC, the Ministry of International Trade and Industry of Malaysia hosted an exclusive roundtable discussion focusing on exploring business opportunities and strengthening cooperation between Vietnam and ASEAN. Delegates also paid a visit to the Hanoi Stock Exchange to understand Vietnam’s capital market.

“We are very encouraged by the openness and the supportive gestures of the Vietnamese government and business leaders during the dialogues with the delegates of the business mission.  Despite the uncertainty surrounding the future of the Transpacific Partnership (TPP), Malaysia and Vietnam can still look forward to a fruitful conclusion of the Regional Comprehensive Economic Partnership in 2017,” said Dato’ Sri Mustapa Mohd, Minister of International Trade and Industry of Malaysia at the press conference held in Hanoi.

The business mission will end with CIMB Group’s hosting of the delegates at the CIMB International Advisory Panel Gala Diner on 9 December, with over 150 high-profile guests including members of the delegation, ASEAN ministers, local business leaders and public officials expected to attend the dinner.