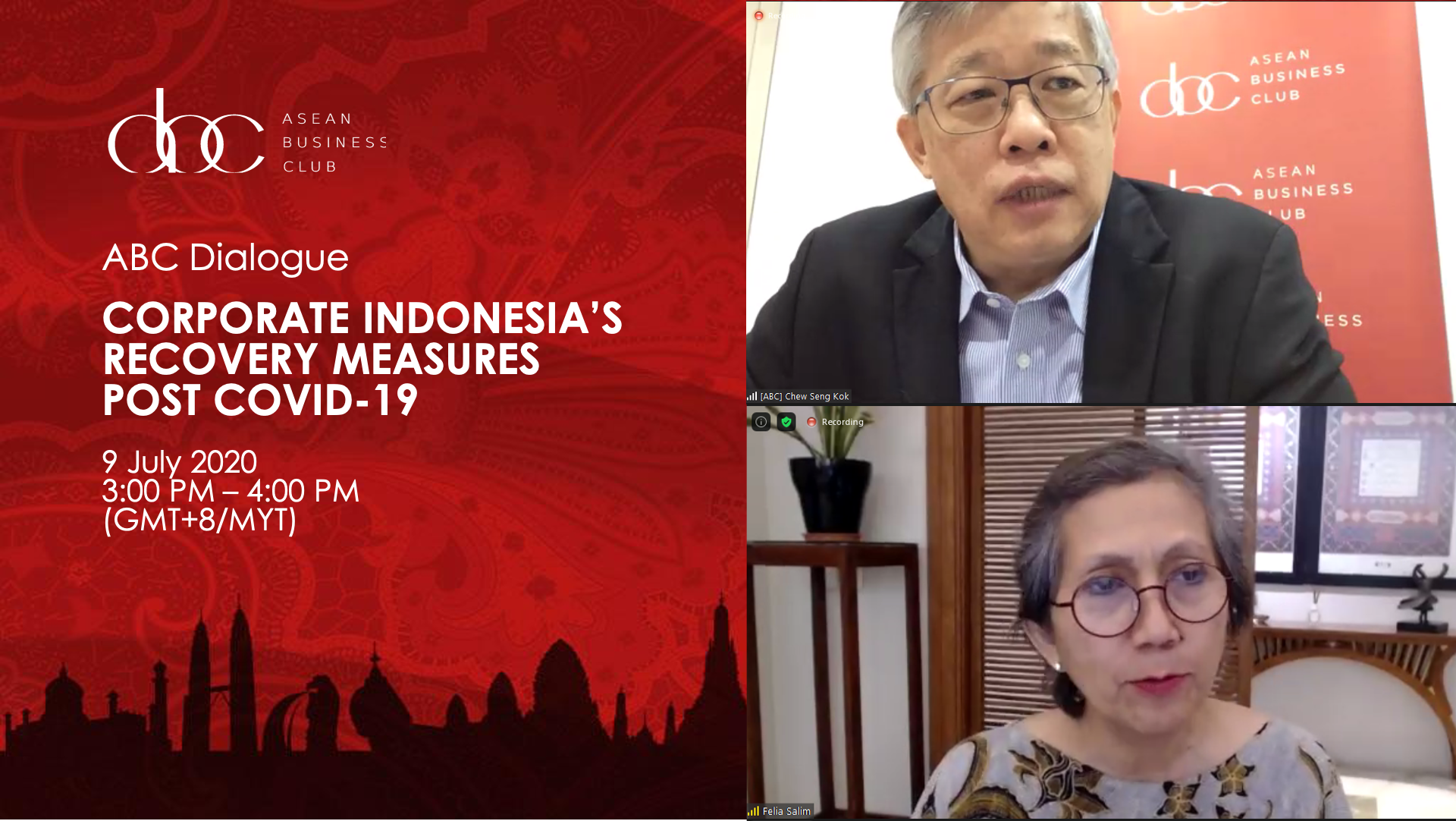 From top right: Mr Chew Seng Kok, Board Member of ASEAN Business Club; and Ibu Felia Salim, Member of the Board of Directors, Indonesia Eximbank.

ABC Dialogue aims to bring together leading business individuals in the region to dialogue on key areas of business and economic cooperation. The ABC Dialogue is an excellent avenue for to have global outreach in ASEAN and to gain insights from major industry players in the region.

Tan Sri Dr. Munir Majid, President of ABC gave the opening remarks highlighting the recent initiatives that ABC has embarked upon including playing an active role as a member of the of the ASEAN Business Advisory Council (ASEAN-BAC). 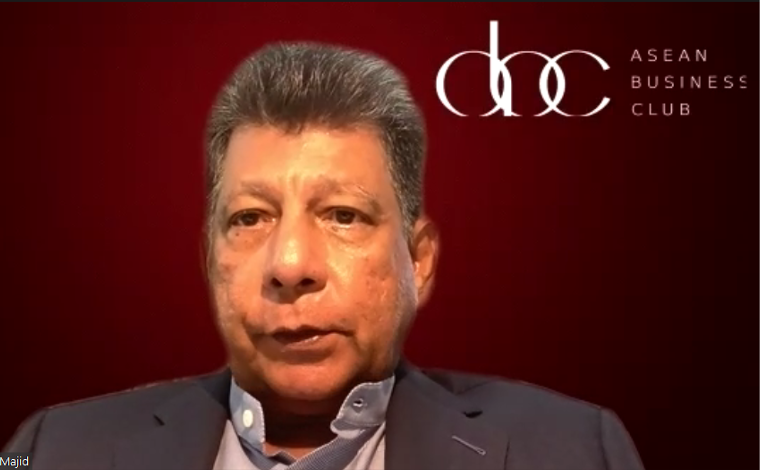 During the ABC Dialogue, Ibu Felia Salim informed that amongst the first policy responses in crisis mode, Indonesia’s Ministry of Finance quickly obtained parliamentary approval to re-posture the national budget to temporarily allow the budget deficit to go beyond the statutory 3% limit to make room primarily for fiscal support mainly for (i) health workers and health-related needs; (ii) social safety net and (iii) Micro Small and Medium Enterprises. Ibu Felia Salim also stated that OJK, the Indonesian Financial Services Authority has introduced a relaxation policy in support of the corporate sector ending March 31, 2021.

Ibu Felia Salim shared her thoughts on several probable scenarios taking into account the health perspective as a priority with gradual and careful re-opening of the economy, starting from the least higher risk sectors such as agriculture, forestry, fishery and manufacturing food and beverage; adopting “smart” localised lockdowns whenever necessary in the face of the prevailing challenge of COVID-19.

Ibu Felia Salim also shed some light on Indonesia’s imposition of a 10% VAT on non-resident foreign tech firms that sell digital products and provide services in Indonesia. She explained that tax revenue from this sector is key to cross-subsidise the nation’s fintech development. More importantly, Ibu Felia also highlighted that long term efforts should focus on more policy and structural reforms, adapting to the digital economy and addressing the digital divide.

Speaking on what ASEAN’s takeaway should be from this pandemic, Ibu Felia stated that beyond the short term fiscal stimulus by Governments, member states should engage and cooperate with their neighbours as a collective, and not withdraw from globalisation but instead rethink globalisation through regionalisation.  Member states should also focus in the medium term on how the region can become a platform for globally strategic sectors as they had done in the healthcare sector for the pandemic. 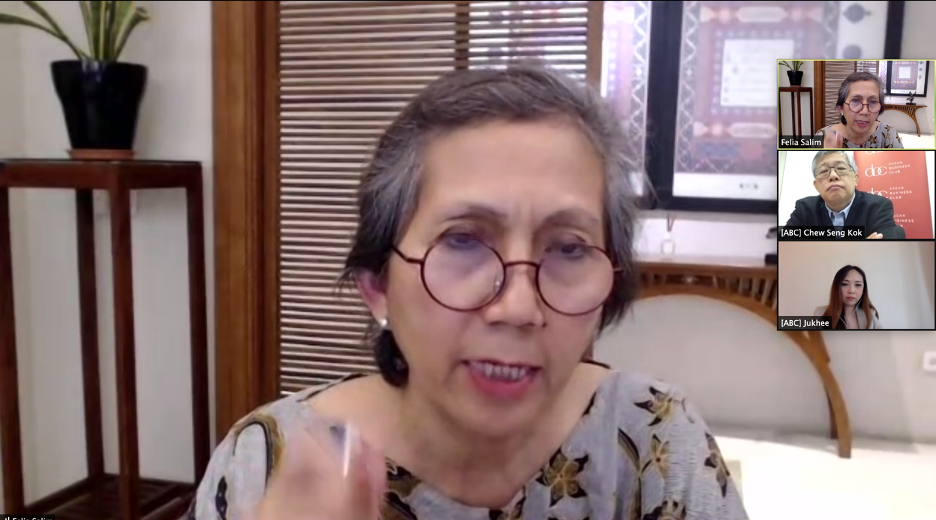 Mr. Chew Seng Kok, Board Member of the ASEAN Business Club who moderated the session commented that the effective measures imposed by Indonesia in handling the pandemic should be implemented in the long run to ensure sustained bureaucratic reform in Indonesia. 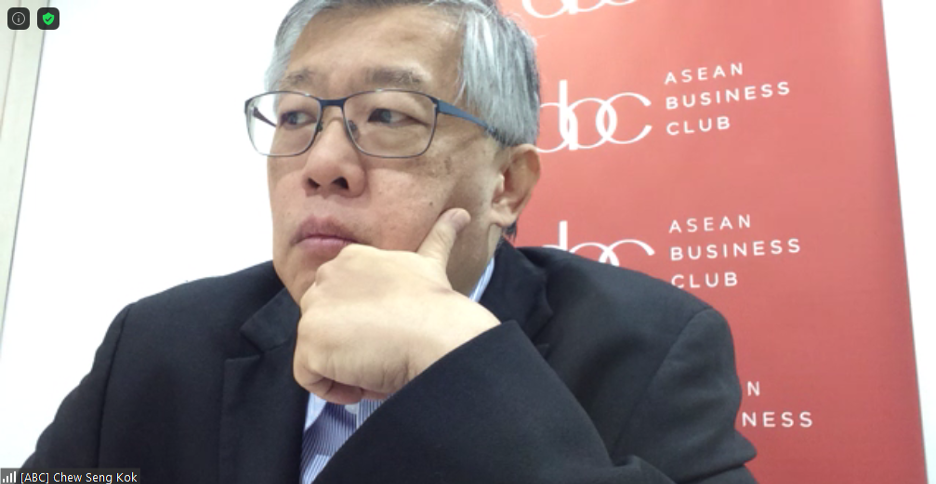 Participants of the webinar actively participated in the Q&A session raising questions on specific insights such as Indonesia’s export trends to post Covid-19, the resilience of banks. Public-private cooperation initiatives in handling the pandemic‘s impact in Indonesia was also discussed.

The ASEAN Business Club (ABC) is a fully private sector driven initiative of ASEAN’s leading businesses that came together in support of regional economic integration, while providing a platform for networking. Representing every key sector, ABC aims to support the efforts of governments in bringing down barriers of economic integration. ABC is a growing regional network that serves as a forum for knowledge sharing and advocacy. The ABC has established itself as a powerful platform for ASEAN’s businesses to engage with global and regional leaders.